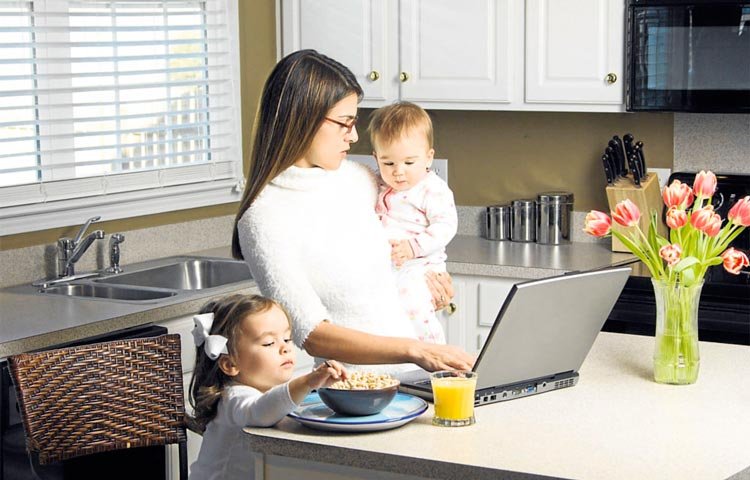 Women in India continue to face discrimination and social challenges which often makes them the victims of domestic violence. But somehow this scene has changed drastically in past two decades. Those times have passed where women were kept confined to four walls and were abandoned to participate in monotony life, now women have been empowered in different walks of life that too in high positions.

But is male dominancy in job sector a fair deal for working women? The answer is no. women are becoming more self sufficient and self made. They are enjoying economic liberty. To break this monotony, woman should come forward and claim their share of hard work i.e. “equal rights in public sphere”.

Indian woman were considered as a household person who are supposed to be confined to their kitchen, home without even having the right to demand anything from her husband. Even though Article 14, Constitution of India provides right to equality in the eyes of law women have always been sidelined by the society.

But there were exceptions where women were given higher authority in political terms. For Instance first woman Prime Minister Indira Gandhi was an efficient leader with immense knowledge in her field and she had the authority over her cabinet and most importantly men leaders working under her. Which was considered as taboo, only men had the right to be authoritative.

Even then role of women were to looking after their family by suppressing their dreams. All they had was their domain in their home i.e. the kitchen and keep everything ready and neat for her family. What she gets back is just few hours of rest and a night’s sleep and then back to duty. Why can’t she take a break from her daily routine, and do something productive and live her life fullest by earning for herself.

Generally women used to play two primarily in an Indian family, one being the wife for her husband and another being mother to her children. But when it comes role played by women for themselves it’s just few hours of sleep and then lots of household chores. Now this trend has changed and more women are opting for work and then home.

They go for work after preparing food and other necessary things for their spouse and their children and then work for 8 to 12 hours at work place and then back home and prepare for next day’s chores and for her job. Even then a woman has to bend her rules for her family rather than her husband and family cooperating with her.

In past few years this has changed and men have started to play their part in doing household chores and helping kids with their homework. On the whole they are becoming a great source of help for their women. Except for exceptions.

In current scenario, both husband and wife have to earn together for ensuring a sufficient amount of funds for their monthly expenses. Even though Indian women are being respected equllant to goddess “shakti” they are still been submissive under their men.

It’s high time that the sole responsibility held by woman alone should be shared by her man and their children as well. Because sharing responsibilities with each other makes everything better in lives.

Also apart from women suppressed at their home, they were given less opportunity at work place. India being a male dominated country, men had more scope and was given opportunities to work at higher positions where women were not even considered to higher positions just because they are married and have a family to look after. As usual men had their ego issues when they even thought of having women at the top position of their company.

But tides have shifted, times have passed. Now we can see women at top positions like CEO, CFO’S of their company. Many have become lawyers, MLA’s of their state, IPS officers, IAS, IFS, and IRS etc. so basically women have become capable of handling both home and work together in a balanced manner. A recent study by OECD (Organization for Economic Cooperation and Development) has shown that Indian men have been contributing least amount of house hold work when compared to women.

But in 21st century when more and more job opportunities are on their way for women, there needs to be a change in the attitude of men and the society towards women.

Economically women contribution is more now than men as most women are educated and are in top positions and strive day and night balancing their work and home. They have been a positive approach toward work which in turn has helped in increasing output of the nation. But the most important job they do is the bringing up of future of India and making them abide by the law and regulations of the country.

Each day women strive to make their own identity amongst the most discouraging specimens of the society men. This is mainly because a woman has the ability to stay strong under immense pressure situations rather than men. As women has to undergo loads of pressure at their home. So if she can handle the situation at home then workplace is a play ground where she can easily work without much stress.

With the government of India 6 months maternity leave and then the assurance of rejoining the company back, she can focus on her work, look after her precious little angel. They are given both intellectual and creative strength experience in the work place and also provide assistance for their home needs so as to reduce the workplace pressure and troubles at home.

There are few examples of women entrepreneurs who have been an inspiration for womanhood.  They have been maintaining their work and home balance for years now. Some of them are:

Arundhati Bhattacharya, chairperson of SBI (State Bank of India), Kiran-Mazumdar Shaw (Bicon CEO), Pepsi CEO Indira Nooyi are examples of successful women who have been balancing between their professional and personal life.

Then comes the issue of different pay for men and women. Most of the companies/firms and other government offices women get salaries much lesser to that of men. Even when in most of the workplaces women are equally talented like men. But despite that they are paid less for their hard work even after the special act which was and is prevalent and enacted by Indian Government since 1976 i.e. Equal Remuneration Act.

Sometimes the caring, loving and affectionate behavior of women is seen as a burden in today’s progressive and combative workplace culture. As per the psychological studies, women bring their own skill set and ability to global business processes and they are one of the reasons for increase in the resource allocation to the weaker sections, i.e. are women and children.

Women are also credible partners for trying to build an equitable society that does not have the huge income inequality which exists presently. 33% reservation in local government is for women. Local govt bodies like panchayats and municipalities have been benefitted because of contributions women of our country.

If Women’s Reservation bill passed by the parliament for providing reservation of women in the Central and State legislatures, was actually passed unanimously by both the houses then more benefits will be for women. Contributions by women in all spheres of life include Administrative services, police services and other allied services.

The entry of women in government filed will pave for forming a new government which identifies and takes care of inclusive development. But the problem of juggling between work and home might still be there.

Liberalization, Globalisation and Privatization also increased opportunities for women in job sector. Number of employers on contractual basis increased to 75% of regular work force.  Increase in casualization of workforce in the wake of reforms of 1991 ushered liberalization.

When it comes to working women looking after their children, it is a hard task for them to work and at the same time take care of their babies. In rural areas women have to carry their baby tied up in a blanket or cloth is common. But in urban areas there are crèches or baby care centres where working women can focus on their work when their babies are in the safe hands.

Modernization and westernization have bought confidence in women to stand up for their rights. But the condition of rural women is worse than that of urban women because they still have to depend on their family and their daily wage jobs for living. Today self employed women’s association started by Ela Bhatt was influenced by the Gandhian philosophy that is rural women should be empowered for them to be independent of their husbands.

Indian culture provides glimpses of the time when women were liberated. Hence for women managing work and home has become a cup of tea. They are trying hard to earn and live their life successfully and also take care of their family without fear of being sidelined by men and the society.

work home
Was the Government’s Crackdown on Baba Ramdev and his Followers Justified?
College Life vs School Life
All about Portfolio Managemen
Comments
I BUILT MY SITE FOR FREE USING